THINKING INSIDE THE BOX: ADVENTURES WITH CROSSWORDS AND THE PUZZLING PEOPLE WHO CAN'T LIVE WITHOUT THEM (VIRTUAL PROGRAM) 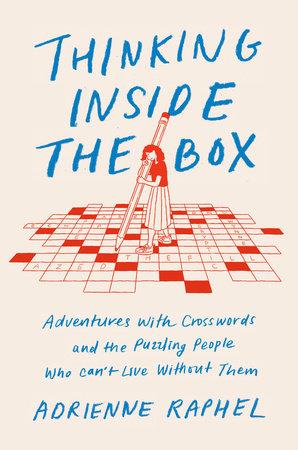 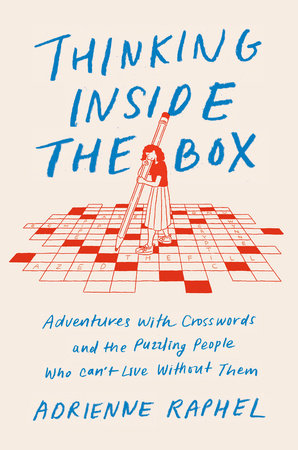 Join us for a conversation with Adrienne Raphel as she discusses her new book, Thinking Inside the Box: Adventures with Crosswords and the Puzzling People Who Can't Live Without Them. The book is a delightful, erudite, and immersive exploration of the crossword puzzle and its fascinating history. Adrienne Raphel has written for The New Yorker, The Atlantic, The New Republic, Slate, and Poetry, among other publications. Her debut poetry collection, What Was It For, won the Rescue Press Black Box Poetry Prize. Born in southern New Jersey and raised in northern Vermont, she holds an MFA from the Iowa Writers’ Workshop and a PhD from Harvard.

Almost as soon as it appeared, the crossword puzzle had already become indispensable to our lives. Invented practically by accident in 1913, when a newspaper editor at the New York World was casting around for something to fill empty column space, it became a roaring commercial success practically overnight. Ever since then, the humble puzzle–consisting of a grid of blank squares in which solvers write answers in response to clues–has been an essential ingredient of any newspaper worth its salt. The puzzle’s daily devotees include everyone from subway riders looking to pass the time to cultural icons such as Martha Stewart, Bill Clinton, and Yo-Yo Ma. Today, its popularity is greater than ever, even as the media world has undergone a perilous digital transformation. But why, exactly, are the crossword’s satisfactions so sweet that it is a fixture of breakfast tables, nightstands, and commutes, and has even given rise to competitive crossword tournaments? There are mysteries beyond the clues.

Blending first-person reporting from the world of crosswords with a delightful telling of its rich literary history, Adrienne Raphel dives into the secrets of this classic pastime. At the annual American Crossword Puzzle Tournament, she rubs shoulders with elite solvers of the world; aboard a crossword- themed cruise, she picks the brains of the enthusiasts whose idea of a good time is a week on the high seas with nothing but crosswords to do; and, visiting the home and office of Will Shortz, New York Times crossword editor and NPR’s official “Puzzlemaster,” she goes behind the scenes to see for herself how America”s gold standard of puzzles is made.

As ingenious as it is fun, Thinking Inside the Box is a love letter not just to the abiding power of the crossword but to the infinite joys and playful possibilities of language itself. This book will be a treat for die-hard cruciverbalists and first-time solvers alike.

THIS IS A VIRTUAL-ONLY EVENT.  REGISTER BELOW BY LEAVING YOUR EMAIL ADDRESS TO RECEIVE LOGIN AND CALL-IN INSTRUCTIONS (SENT 1-2 DAYS BEFORE THE PROGRAM).